UPDATE: Anthem of the seas will return to Bayonne, NJ due to “upcoming weather patterns, as well as guests’ comfort,” Royal Caribbean announced.

Anthem of the Seas runs into major storm off the coast of the Carolinas.

Passengers aboard Royal Caribbean’s newest cruise ship, the 168,666-ton Anthem of the Seas, encountered a pretty rough ride on Sunday and into the early morning hours.

While the National Weather Service had predicted hurricane-force winds and high seas, the storm appears to have intensified more than expected as the evening progressed.

The Anthem of the Seas departed on a round-trip cruise from Cape Liberty (Bayonne), New Jersey on Saturday bound for a call at Port Canaveral and the Bahamas.

In the interest of safety, the Captain asked the 4,000+ passengers to remain in their cabins as furniture toppled over, glass panes broke and even a ceiling panel broke loose.  Four people are reported to have minor injuries.  The good news is that mini-bar contents were complimentary as were in-room movie rentals.

The Captain tried to maneuver the ship into the wind but the seas and the 120-mph winds made it very difficult to maintain an “into the wind” position.

A statement released by Royal Caribbean, “In an abundance of caution, the Captain asked all guests to stay in their stateroom until the weather improved. At this time there have not been any serious injuries reported. The ship has sustained some damage to the public areas and guest staterooms, which in no way affect the sea-worthiness of the ship.”  The Coast Guard has been monitoring the situation since the ship encountered the storm.

Storms like this are common for mid-winter transatlantic crossings not usually the Atlantic seaboard.  Only Cunard’s Queen Mary 2 can truly be called an ocean liner and not the typical “cruise ship”.  The Anthem of the Seas is a cruise ship. Even though even a cruise ship can easily withstand the type of storm as experienced on Sunday, the “ride” is certainly more rock and roll and listing than it would be in similar weather conditions on an ocean liner like the Queen Mary 2.

Ed. note:  With the decision made to turn the ship around and head back to Cape Liberty / Bayonne, NJ., passengers will receive a full credit for the cost of this cruise plus a 50% future cruise credit. 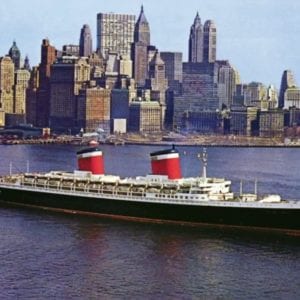