Growing up in the small town of Perpignan in the South of France, Jean-Philippe learned to bake cakes with his aunt. When he turned 17, Jean-Philippe embarked on a career in pastry arts that began at l’Ecole Hoteliere du Moulin à Vent in Perpignan.  His course of study included pastry, chocolate and ice cream.

While in school, Jean-Philippe trained with some of the top pastry chefs in France.  Enrolled in a Master’s Program at La Chambre de Metiers, he received a degree in Pastry.  It was then that he decided to participate in pastry competitions throughout France.  He won numerous awards, including the prestigious Meilleur Ouvrier de France in 1997 and was named the best pastry chef in France.

“I am truly honored to partner with MSC Cruises in this new exciting adventure. Creativity and passion will lead us to the next level of excellence,” says Jean-Philippe Maury.

MSC Cruises, a privately-owned Italian cruise line and shipping company, has a passion for the culinary arts and the addition of Jean-Philippe Maury will elevate gourmet chocolate, pastries and desserts to a new level for cruise ships.

“We constantly look to surprise and delight our guests with new and authentic culinary experiences. Jean-Philippe Maury is a world pastry champion who embodies passion, elegance, innovation and excellence – the same characteristics that distinguish MSC Cruises,” said Rick Sasso, president of MSC Cruises.

MSC Cruises has begun to roll out the new confectionary options aboard the MSC Divina, sailing year-round from Miami to the Caribbean. The new dessert creations will soon be available at the ship’s buffet, specialty restaurants and in the exclusive MSC Yacht Club.

When MSC Cruises launches the MSC Meraviglia in June 2017, Jean-Philippe Maury will have a permanent presence with his own chocolate atelier.  At this first-of-a-kind at sea confectionary workshop, guests will be able to watch skilled pastry chefs and chocolatiers in action and of course sample the delicate culinary creations.

There are three more next-generation ships on order for MSC Cruises; one additional Meraviglia-class and two Meraviglia-plus class ships which will also feature the same unique open kitchen concept.

Also in the plans, Maury will work with MSC Cruises to create a gourmet ice cream parlor and creperie located within the impressive indoor promenade on these four new ships. 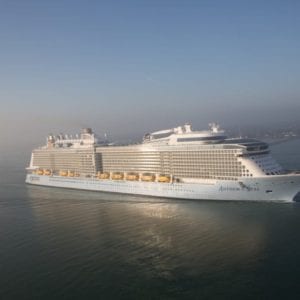 Anthem of the Seas Cruises Through a Rough Night at Sea