Grand event at Southampton marks the christening of the Anthem of the Seas.

Royal Caribbean International likes to do things a bit different than other cruise lines.  So today, for the naming of their newest, most techno-savvy ship yet, they bestowed the honor of Godmother to the Anthem of the Seas on a 27-year old British travel agent, Emma Wilby.

Accompanying Emma Wilby was the Welsh choir Only Boys Aloud, finalists from the show, Britain’s Got Talent; the same show that made Paul Potts and Susan Boyle household names.  No slouch performances here.

Following this and other performances, as is tradition, Emma Wilby pressed a button to release a bottle of champagne to crash against the hull of the Anthem of the Seas, making the ceremony officially complete.

Sister ship to last year’s debutante, the Quantum of the Seas, the Anthem retains most of the exciting new features introduced on the Quantum of the Seas plus some new ones.  Like the Quantum, there’s Northstar, a glass capsule that takes guests up to 300-ft above the ship for a 360 degree view and the RipCord iFLY, a skydiving simulator.  New to the Anthem is super-fast wifi, technologically advanced entertainment and even robotic bartenders.

A towering 18 decks tall, the Anthem accommodates over 4,180 guests with 2,090 staterooms.  Anthem of the Seas will sail out of Southampton, U.K. for her inaugural summer season before crossing the Atlantic for the new homeport of Cape Liberty Cruise Port in Bayonne, N.J.

Stuart Leven, Managing Director, UK & Ireland at Royal Caribbean International, said, “Royal Caribbean really likes to do things differently; from the way we build our ships to the way we found our Godmother. Just look at Anthem of the Seas – there’s something for everyone, indoors and outdoors, and we’re confident this ship will help us to attract a whole new audience to cruising.”

The first passenger voyage from Cape Liberty departs on November 10, 2015 for a 12-night southern Caribbean cruise to San Juan, Puerto Rico; Barbados; Fort-de-France, Martinique and St. Kitts, returning on November 22.  Other itineraries throughout 2016 will range in length of 5- to 12-night cruises. 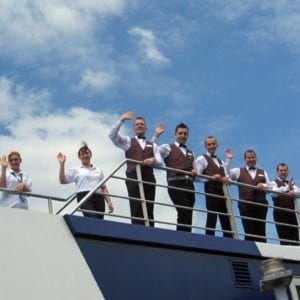 Disney River Cruises for Families in 2016? You Betcha.