The ship’s name was inspired by the constellation, which is visible throughout the world, and Dr. Fisher’s work on NASA’s Orion exploration vehicle project. The new ship will spend her maiden season sailing the Mediterranean.  Following the Med, the ship will reposition to Australia, Asia and Alaska.  Viking Orion will be Viking’s first ship to add cruises to Alaska to its roster of unique itineraries.

Read next:  My Viking Star review on a Mediterranean cruise

“Today we celebrate the delivery of our fifth ocean ship, just three years after launching our ocean business,” said Torstein Hagen, Chairman of Viking. “We are pleased to welcome Viking Orion to our award-winning fleet and look forward to introducing more guests to the Viking way of travel, through culturally-immersive and destination-focused itineraries as we expand to new destinations in Asia and Alaska.”

Viking’s ocean ships have 465 staterooms to accommodate 930 guests. Sister ships to this newest ship include Viking Star, Viking Sea, Viking Sky and Viking Sun.  When the next ship, Viking Jupiter is launched in Spring 2019, it will make Viking the largest small ship ocean cruise line. Ten more ships are planned for delivery starting in 2021, which would bring Viking’s ocean fleet to 16 ships by 2027. 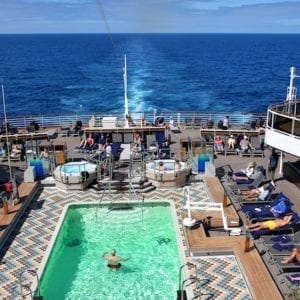