First time for any cruise ship naming ceremony on the Bund in Shanghai.

When Viking Cruises named its fourth ocean ship, Viking Sun on The Bund, in the heart of Shanghai, it was the first time for any Viking ocean ship to make a port call in China.  Interestingly, Viking Sun is in the middle of a 141-day World Cruise from Miami to London.  Viking Sun arrived in Shanghai in the early morning hours, first navigating into the mouth of the Yangtze River and then up the Huangpu River into central Shanghai.

The 930-passenger Viking Sun docked at the Shanghai Port International Cruise Terminal, next to the celebration stage for the spectacular events that would follow the naming ceremony.  Viking’s World Cruise guests and international dignitaries were treated to high-tech show and musical concert on the waterfront that paid tribute to the special friendship between Norway and China.

Mrs. Yi Lou, Vice President of China Merchant Bank Financial Leasing was the godmother and offered a blessing of good fortune and safe sailing for Viking Sun.  She also cut a ribbon that allowed a bottle of Norwegian aquavit to break on the ship’s hull.

The following day, Viking Sun set out from Shanghai for Southeast Asia and India.  Then it will be onto the Red Sea and through the Suez Canal into the Mediterranean. The ship will arrive in London on May 5 after visiting five continents, 35 countries and 64 ports during her first World Cruise.

Another world cruise is planned for Viking Sun in 2019, a 128-day voyage from Miami to London. 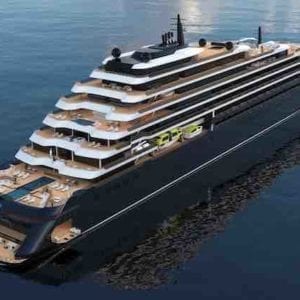