Princess Cruises asks, how do you escape completely?

Three weeks ago, Princess Cruises announced yet another fun way for past passengers to stay connected to Princess.  When the cruise line asked their guests to share celebrated moments of shipboard friendships and romances, they received an overwhelming 1,000 stories, photos and videos from their past guests.  For simply sharing their Princess vacation memories, someone will win a 7-night cruise aboard the new Royal Princess.

For those who haven’t yet shared their most memorable Princess Cruise moments, head over to princess.com/sharestory and submit your special story by March 31, 2013 for a chance to win the 7-night Caribbean cruise aboard the Royal Princess.

Over at Facebook, Princess Cruises has more than 1,000,000 fans who’ve clicked the “Like” button on the Princess Cruises fan page.  Reconnecting with their fans to say, “thank you,” Princess Cruises awarded five of those fans a free cruise for two in a balcony stateroom.  Fifteen other fans received onboard credits to use on their upcoming Princess cruise.

Princess Cruises is one of the leaders in cruise line social media.  They continually think of clever new social campaigns to engage past passengers and potential new guests.  For fans that want to meet up with other like-minded Princess cruisers, Princess also has a Roll Call feature on their Facebook page.  To keep up with Princess Cruises news, fun and contests,  you should “Follow” and “Like” Princess Cruises on Twitter and Facebook.

While researching this article, I read a few entries in one of the three Princess blogs, “Inspired to Cruise.”  One comment to someone’s shipboard romance story was so funny, I thought it was worth repeating.  The reader commented, “I met my sweetie on the Island Princess and after 5 glorious years of marriage and 5 children – one set of triplets, one set of twins, we still love going on the Island Princess every year for our anniversary. Now however we use contraception for we know where the kids were conceived. Hehehehe.” 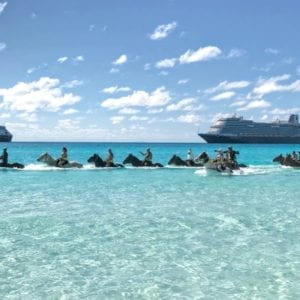