At a cost of almost $50 million, Cruise Terminal 5 at Port Canaveral has finally re-opened.  The major overhaul included an expanded terminal, a longer 120-foot longer pier, a new 1,044-space parking garage, and new mobile passenger boarding bridges.  On hand for the celebration was the Carnival Valor, arriving at sunrise to its new home at the refurbished terminal.

Built in 1991, the newly re-designed terminal took nearly nine months to complete.  Hiring mostly local workers from Brevard County, the crew consisted of 37 companies and a construction crew of 500 just to work on the terminal.  Another 50 companies with a crew of 450 completed the parking garage.  In total, the massive reconstruction project took a total of 265,000 to complete.

All part of the grander scope for the future Port Canaveral complex. 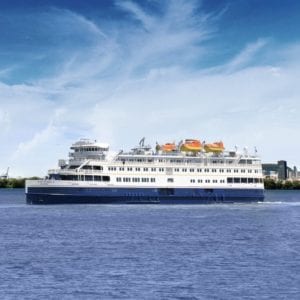