The evening inaugurated the partnership with a mutual commitment to serving sustainably sourced Alaska seafood on all six of Holland America Line’s ships cruising Alaska.  This is the first formal relationship of its kind between ASMI and a major cruise line.

The culinary event was held at Twisted Fish Co. and continued aboard Nieuw Amsterdam for an exclusive dinner in the ship’s Pinnacle Grill specialty restaurant.

“We’ve been sharing the thrill of Alaska with guests for 75 years, longer than any other cruise line. Protecting and enhancing that heritage is a matter of commitment and pride. The Alaska seafood industry’s longstanding commitment to wild seafood is very much in line with our own sustainability efforts, as well as our responsibility to the planet and its people,” said Rough of Holland America Line. “We’re committed to partnering with local businesses and we’re proud to be working with Alaska’s fishing families.”

Chef Stowell’s new creations will be featured in the Dining Room on all six Holland America Line ships cruising in Alaska this season. Among the new dishes are a fried Alaska cod sandwich with malt vinegar aioli and savoy cabbage slaw.  Also added is an Alaskan salmon chop with cucumber, tomato, avocado, bacon and green beans.  The third new creation with wild Alaska seafood is a roasted fennel crusted Alaska halibut with artichokes and Taggiasca olives.

Holland America already serves several Alaska seafood dishes in several of their restaurants.  Now there are three more to enjoy.

Part of Holland America’s “Alaska Up Close” program, the cruise line and ASMI will showcase Alaska’s waters, and the people involved in Alaska’s teeming seafood industry.

In addition to Stowell’s new dishes, onboard enrichment will include more new recipes, destination and cooking demonstration videos, and on-board Alaska seafood trivia

How Much Seafood is Served on Those Six Alaska Ships?

The waters off Alaska produce some of the finest fish and seafood in the world.  Come onboard a Holland America cruise to Alaska and find out for yourself! 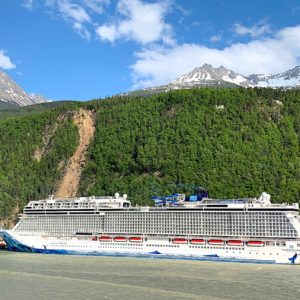