This time for whale watching in Juneau, I was prepared.  The words, “Don’t forget to grab a large plastic bag” popped into my head just before I closed the door to my stateroom.  This was my second whale-watching shore excursion from Juneau, but the first time I brought along a real camera.

On my first whale watching tour from Juneau, I didn’t know what to expect.  I was concerned about how wet we might get from the mist, if it would be too bumpy a ride, things that could wreak havoc and possibly ruin my Nikon.

So as a result, I left my real camera on the ship.  Any photos taken would be with my iPhone.  Looking back, I did manage to get some good whale pics.  But even after cropping and zooming in, none were really what I wanted to capture.

My sought-after goal this second time was to get some really good up-close and personal photos of humpback whales.  Armed with my iPhone, Nikon and the protection of a waterproof ziploc-type bag, I was fully prepared for the weather, wind and sea.

Rather than purchase a ship’s shore excursion, I looked for a small group tour company based in Alaska and decided to try Alaska Shore Excursions.  Their tour boat holds less than 50 guests, about one-third of a cruise ship’s tour boat capacity.

Not that there’s anything wrong with the larger excursion boats.  That’s what I did for my first whale watching cruise and it was perfectly fine.  But I wanted to try the smaller craft just for the experience.

As do many Juneau shore excursions, we met at the Mt. Roberts tramway building at the port.  It’s impossible to miss it.  Unfortunately, and for some odd reason, our ship (Holland America’s Maasdam) was bumped from its original prime docking spot in downtown.

The ship was relegated to the overflow industrial off-shore tendering spot. There’d be a bus to take us from where the tender would drop us off to downtown.

With a 10am meeting time for my tour, I couldn’t wait for the next bus.  It was supposed to be a 15-20 minute walk to the tram station so I decided to hoof it.  What I wasn’t prepared for was the uphill walk from the dock to the main street.

By the time I reached the tour, I was roasting and exhausted.  But I was there on time.

The first time I saw the massive Mendenhall Glacier, only 15 minutes from downtown Juneau, it struck me that I was actually and finally in Alaska.  Only the second port on my first Inside Passage cruise and I was awestruck.

For my second go-round, this time with Alaska Shore Excursions, we had almost an hour to walk around the park, take photos (with my “real” camera) and look for the infamous gigantic brown bears.

Almost every whale watching tour from Juneau leaves in an old school bus, and this tour was no different.  Our bus driver José was from Miami and came up to Juneau for the tourist season.  He had some silly stories to tell us and I truly think it’s from the Juneau bus drivers’ playbook.  Some were a little too familiar from other tours.  But still fun.

Back on the school bus.  With Mendenhall Glacier to our backs, it was a short jaunt to the dock in Auke Bay and part two of our tour.

Yes, that’s our Captain.  She probably wasn’t older than 30 years and with her red hair and freckles, made the most unobvious tour boat captain.  But looks can be deceiving.  She knew every inch of the water, kept in close contact with other whale spotters and tirelessly offered facts and figures about whales, seals, the water…everything.

After about 30 minutes hauling through the channel, we stopped.  But not for whales.

It was our first marine life sighting and the perfect photo op.  Again, I used my iPhone and left my Nikon back inside the boat, on the cushioned seat.  But the best was yet to come.

These tour boat captains are in constant contact with park rangers and naturalists who happen to know the names of almost all the whales. Soon enough, our Captain was telling us about so-and-so whale, naming each one that we saw.

READ NEXT:  Eight Tips for Booking Your Own Shore Excursions

There were so many humpback whales cruising along the surface that it was difficult to count them all before one submerged.  But then you wait for the last second to watch the fluke dip below the surface.

This really got everyone, Captain and crew alike, excited.  The mom had returned in the spring with her new calf.

Everyone was suddenly silent as mom and baby cruised right past us.  It was mesmerizing to watch their tandem glide and eventual dive.

After about two hours of whale watching, it was time to turn around and head back to the dock.  Inside the comfortable and heated cabin, one of the crew members handed out bottles of water and Quaker granola bars.  We weren’t there for the food so the little snack was fine.

Back at the dock, we gingerly stepped off the shiny George Ryan tour boat.  Gingerly because in the time we were at sea, the tide had gone out, and a bit of wind kicked up.

The floating dock slightly swayed and dipped under the weight of all of us.  The ramp, which was only a bit steep on the way down to the boat was suddenly an uphill trek.

There was only one person, an elderly man, who had trouble trying to step off the boat and found the walk up the ramp to be too difficult.  The two young crew members tucked their arms through his and slowly helped him to the top.

Why Choose this Tour with Alaska Shore Excursions

The main reason is size.  As I mentioned at the beginning, we had less than 40 passengers.  Truly, even on a ship’s shore excursion with 150 people, the boat is bigger to accommodate everyone.  But this time I wanted a smaller experience.

With a little less time to wait for everyone to board the bus and boat, time wasn’t spent waiting in line.  Cruising on a big ship with 2,000+ passengers, I appreciated the contrast of being with a small group on this tour.

Also, with fewer people, the super-friendly onboard crew was able to interact more closely with the passengers.  They answered everyone’s questions and shared their knowledge without interruptions or people talking over them.

Our tour boat, the George Ryan, was equipped with a bathroom that was spotlessly clean.  The inside heated cabin had comfortable bench seating and a foot rest. You could get up and move about, inside, outside – either at the aft as I did or upstairs on the top deck.  The only rule was to wait for the Captain to say, “It’s now okay to move about the vessel”.

What to Know Before You Go Whale Watching

This applies to any whale watching tour.  There are extreme high and low tides in Alaska.  If walking up or down a steep ramp at low tide might be a challenge, then this may not be the tour for you.

This also means that it’s nearly impossible to accommodate a wheelchair.  While I never get seasick, if you do then you might think about taking precautions.  Ask your doctor for advice before you leave home.

Included in the price for this Alaska Shore Excursions tour were the snacks, bottled water and admission to the Mendenhall Glacier Visitor’s Center.

Booking a tour with Alaska Shore Excursions has a 100% guaranteed whale sightings or they will give a full refund for the whale watching portion of the tour.  From cruise ship terminal roundtrip, it’s about 4.5 hours total.  You’ll spend, as I did, about two hours whale watching and 45 minutes to an hour at Mendenhall Glacier.

Disclosure:  I was a guest of Alaska Shore Excursions but this did not influence my review.  All opinions are my own.  I had a great time, saw spectacular whale sightings, and even learned a bit more about whales. 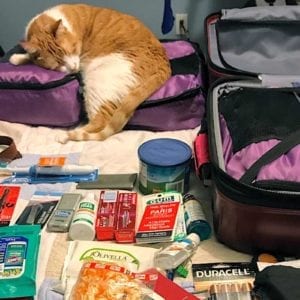 Eight Things You Don’t Need to Pack for a Cruise