The third and final Emerald Waterways Star Ship for 2017 was launched on Sunday, Oct 1.  The Emerald Liberté is the third sister ship to their Star Ship fleet to launch this year.  Australian travel industry veteran and cruise and tour director Maxine Collins was Godmother for the official ceremony.

In May this year, the Emerald Destiny, first of the 2017 Star Ships, was launched in Vienna.  Next in June was the launch of Emerald Radiance in Porto, Portugal.

Since fledgling Emerald Waterways began in 2014, the fleet has grown to seven river ships.  Itineraries include the Rhine, Main and Danube, the Douro in Portugal and in France, the Rhône and Saône rivers.

Built for cruising the shallow waterways in France, Emerald Liberté and features innovations like a pool that becomes a cinema at night and drop-down glass balcony windows in all suites. The Star Ships can accommodate up to 138 guests.

Emerald Liberté cruises the Rhône and Saône rivers through Provence and Burgundy regions on eight-night itineraries beginning in either Lyon or Arles.  France cruises are available between April and October. 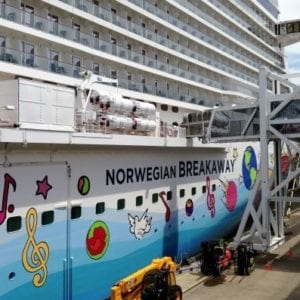