As a result of the COVID-19 pandemic, the delivery of Mardi Gras to Port Canaveral was pushed back to February 6, 2021.  Remember, Mardi Gras will be the first LNG-powered cruise ship in the western hemisphere and have the first roller coaster at sea.

Carnival Victory, soon to be Carnival Radiance, is still in Cadiz, Spain awaiting word on when the $200 million dry dock refurbishment will resume.  Hopefully, said the cruise line,  work will begin again next spring.

Carnival is notifying passengers and travel agents of all the cancellations and refund or future cruise credit options.

Norwegian Cruise Line and Royal Caribbean are strange bedfellows for sure and have formed the Healthy Sail Panel.  Started nearly one month ago, the panel is co-chaired by Mike Leavitt, former governor of Utah under George W. Bush and founder of an investment group that bears his name and Dr. Scott Gottleib, former Commissioner of the FDA under the Trump administration.

The goal, along with several noted Drs and PhD’s in public health and epidemiology, is to develop a list of health and safety protocols to present to the CDC.  With the end result being able to pass the CDC’s requirements to begin safely cruising again.  The Panel hopes to present their guidelines to the CDC by the end of August.

European cruise lines are working with an agency called Health Gateways, to develop protocols that will enable the cruise lines in Europe to resume cruising.  Some of what they hope to put into place may be similar to what might happen here, as well.

It’s fairly logical.  Suggestions include wearing masks in many public spaces, keeping enough staterooms empty that could isolate up to 5% of passengers.  Another idea is to allow “one person in the pool per [13 feet]”.

Recommendations also suggest shorter rather than longer cruises that in turn would limit the number of port calls.

The group also states that there should be “plans in place” for a “partial or complete ship evacuation” and the repatriation of all passengers and crew from any port along the way.

Onboard activities could be organized by age group, and scheduled times for dining, embarkation and debarkation are included in the document.

It is also recommended that any items in the stateroom that can’t be cleaned and disinfected between cruises should be removed.  That would include in-room coffee makers, mini-bar items, magazines etc. Dining might even be segregated by having people dine with their group of family members. I’m not really sure how that would work, especially with solo cruisers.

P.S.  I wouldn’t miss the in-room coffee makers – I’ve never seen one that when I open the lid where you’d pour water, that it wasn’t gross.

READ MORE:  What the Future of Cruising Could Look Like

Royal Caribbean Delayed launch of their newest ship, Odyssey of the Seas

Nothing new here as Royal Caribbean announced that the launch of their new Odyssey of the Seas will be delayed.  The new ship was supposed to launch in Fall this year but now the cruise line plans on sometime in April 2021.

According to an email sent by Royal Caribbean, not only has the pandemic impacted shipyard operations but also the supply chain.  As a result, all sailings between November 5 and April 17, 2021 are canceled.

As we’ve reported here before, guests whose cruise was canceled will receive a 125% future cruise credit.  They can also request a refund to their original form of payment.  If you’re lucky, you might see the refund on your credit card within 45 days.

Royal Caribbean also has created their “Lift and Shift” program so they can keep your money while you rebook your cruise in the same stateroom category as well as the same itinerary and within a four-week period of your original cruise, within a year.

Second ship under the Carnival Corporation umbrella bites the dust

Last week it was Costa Victoria that was sold for scrap.  This week, P&O cruises sold their 20-year old ship, Oceana.  Neither the buyer nor the selling price was mentioned by P&O.  I wonder what Carnival Corp ship will be next…any guess? 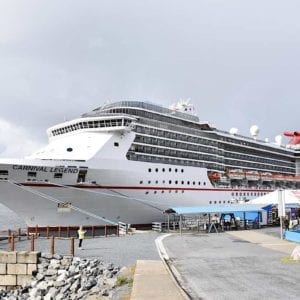