Wednesday saw yet another Carnival ship move into central Florida’s Port Canaveral.  The Carnival Magic recently underwent a multi-million dollar makeover.  When the ship emerged, many of the new favorite restaurants and shops now found on most of Carnival’s ships are also on the Carnival Magic.

One brand new feature is Guy’s Pig & Anchor Bar-B-Que Smokehouse, the second eatery designed by Food Network star Guy Fieri for Carnival.  The first, Guy’s Burger Joint, is found on almost every Carnival ship and is one of the most popular restaurants at sea.

To commemorate the grand opening of Guy’s Pig & Anchor Bar-B-Que Smokehouse, media and local officials were invited to share in the official “ribbon cutting” ceremony, which was really a 6-foot long pulled pork sandwich cutting!

Families with kids will be happy to know that there’s also the colorful WaterWorks aqua park with a 312-foot-long Twister slide, an aerial ropes course, supervised children-to-teen activities and play areas for kids in three age groups.  Fans of Dr. Seuss can participate in the Seuss at Sea program which includes a Green Eggs and Ham theme breakfast with The Cat in the Hat and Friends and a Seuss-a-Palooza Story Time and Parade.

In addition to the Carnival Magic, there’s also the Carnival Victory and Carnival Valor cruising year-round from Port Canaveral on 3- to 9- night cruise itineraries. 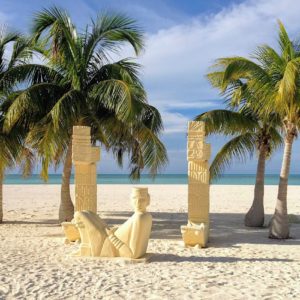 Carnival Ships Plan Longer Stays at the Port of Cozumel