Odyssey’s highlights include the next generation of their SeaPlex activity space, the largest indoor play area at sea.  Adventure Ocean for kids will be amped-up with an entirely new layout.  Teens can party in a newly designed teen lounge with gaming consoles, music and movies.  There will also be an outdoor patio teen hangout area, too.

“Odyssey of the Seas will set an all-new standard created to deliver the most memorable vacations by combining immersive experiences, the best of Royal Caribbean’s trendsetting innovations and the signature ‘Royal Way’ service of our dedicated crew members,” said Michael Bayley, President and CEO, Royal Caribbean International. “This Quantum Ultra Class ship introduces a new way to see the world as she becomes our first purposefully built vessel for island hopping on both sides of the Atlantic.”

Dining On Board Odyssey

Culinary cravings will be met with options to please every palate. Making its North American debut is Teppanyaki, serving authentic oriental cuisine cooked in one of Japan’s traditional styles, prepared and served teppanyaki-style at your table.

READ NEXT:  Royal Caribbean Freedom of the Seas Gets Mega-Million-Dollar Makeover

Also returning to Odyssey will be Izumi for sushi and sashimi, Chop’s Grille for hand-cut steaks, the Chef’s Table intimate dining experience and fantastically creative food at Wonderland.

With SeaPlex boasting the largest indoor activity space at sea, guests can try both interactive and solo recreation.  The upper level of SeaPlex will have Virtual Reality games for individual and group play, plus augmented reality walls and floors for high-tech competitions and family experiences.

There’s a full-sized sports court with the only bumper cars at sea.  Test your acrobatic skills and soar from a flying trapeze. The same space will also double as a glow-in-the-dark laser tag arena where Yetis and Snow Shifters compete against each other as they battle for survival and control of the mythical ice city in Clash for the Crystal City.

Also located within SeaPlex is Playmakers Sports Bar & Arcade.  Features in Playmakers include:

A Royal Caribbean ship would be incomplete without the iconic FlowRider surf simulator.  Try a skydiving freefall on RipCord by iFly or climb the 40-foot rock wall.  There’s also the bungee trampoline experience, SkyPad, that incorporates Virtual Reality into the jumping experience.

Where Odyssey will cruise

After a transatlantic crossing in November 2020, the new ship will set out for a winter season of six- and eight-night cruises from Ft. Lauderdale.  In May 2021, Odyssey of the Seas head east across the Atlantic to her summer homeport in Rome. 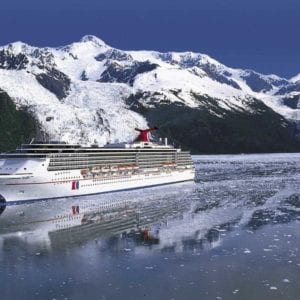