In celebration of Princess Cruises’ 50th anniversary of Alaska cruises, the cruise line commissioned and dedicated a special totem pole to the city of Ketchikan.

It’s nice to know when a cruise line give back to the communities that their ships visit.  In this case, to thank the small coastal town of Ketchikan for supporting Princess Cruises for the past 50 years, the cruise line held a 50th anniversary event at the Ketchikan Visitors Bureau.  During the celebration, Princess Cruises dedicated a locally-carved totem pole in gratitude for the five decades of Ketchikan welcoming their cruise passengers.

Created by local carver, Kelly White, the Masters of the Sea totem pole will be a permanent installation at the Ketchikan Visitors Bureau.  Aside from being a native carver, Kelly also spends time as a Princess Cruises cultural ambassador for its “North to Alaska” program.  Kelly actually carved the totem pole while onboard Ruby Princess and Grand Princess giving passengers a chance to see and learn about native art and culture.

Masters of the Sea Totem Pole

Every totem has a story or meaning.  Carefully carved into Masters of the Sea, you’ll find a killer whale, a brave hunter, octopus and at the base is a halibut – a fish that is a year-round food source for Southeast Alaska.

“We’re proud to dedicate this beautiful totem pole, inspired by the sea, to the community of Ketchikan, visible long after our cruise ships depart each season,” said Lisa Syme, vice president of marketing at Princess Cruises. “We hope it reminds the local residents of Ketchikan of the key role they play in introducing the culture and passion of Alaska to our guests. We’re grateful to Kelly White for his incredibly talented craftsmanship.”

Carver Kelly White lives in Ketchikan and is of Tlingit heritage.  He also is a guide at the Totem Heritage Center in Ketchikan, meeting and talking with visitors to share his passion for traditional art and native culture.  In 2011, he was invited to help carve the Sitka National Historical Park Centennial Pole.

For the past 50 years, over five million Princess cruise passengers have visited Ketchikan, the southernmost cruise ship port in Southeast Alaska. On cross-Gulf cruises, Princess makes a day stop in Glacier Bay National Park and Preserve.  Princess Cruises Alaska cruises range from seven to 14 days and have departures from Vancouver, BC; Whittier (for Anchorage), Seattle, San Francisco and Los Angeles. 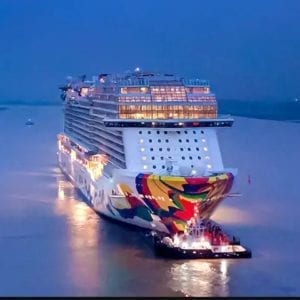