Executives from Norwegian Cruise Line traveled to Hoonah and broke ground on a second cruise pier at Icy Strait Point.  If you’re curious where all this is located, it’s on Chicagof Island on the Inside Passage.

The pier is scheduled to be completed for the summer 2020 Alaska cruise season and will be built to accommodate Norwegian Cruise Line’s Breakaway Plus-class ships. The partnership will provide Norwegian’s brands with preferential berthing rights in the popular port destination and allow the company to increase its calls to Icy Strait Point. Currently, Oceania Cruises’ Regatta, Seven Seas Mariner, Norwegian Jewel and Norwegian Joy are scheduled to call on Icy Strait Point in the 2019 season.

Tlingit Elders blessed the site and retold the story of the town’s founding.

“It all starts two centuries ago, when we left Glacier Bay, and an advancing glacier forced us out of there,” Huna Totem Corporation Board Chairman Ed Davis said. “Just think about our ancestors leaving our homeland and coming ashore on the very land you guys are standing on.”

“The economic impact that this expansion and Norwegian’s investment will have in Hoonah and the Southeast Alaska region is significant, and we’re looking forward to how our Alaska Native community can be a sustainable contributor to the future of Alaska’s cruise industry,” said Russell Dick, Huna Totem Corporation president and chief executive officer.

“Icy Strait Point is one of the few Alaska cruise ship destinations where cruise passengers can step off the dock and into Alaska wilderness. We have the land, the capacity and the hospitality to welcome more travelers into our home in an authentic way while maintaining our heritage and the values of our Native Tlingit culture.” 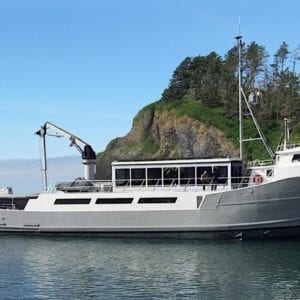