Ed. Note:  As of today, after speaking with Royal Caribbean, I was informed that the Royal Amplification for Allure of the Seas was not done as planned, pre-pandemic.  The cruise line has not determined when the drydock will occur.

Read on to learn what to expect when Allure of the Seas finally does go into refurbishment, a.k.a Royal Amplification.

Royal Caribbean’s fleet “Amplification” project continues.  Next up is the 5,400 passenger Allure of the Seas refurbishment scheduled during a nearly-two month dry dock event in Barcelona next spring.

The Allure of the Seas refurbishment is scheduled over a 58-day drydock to the tune of $165 million dollars.

Allure of the Seas Refurbishment Includes…

You’ll see the biggest change at the waterparks.  First, they’re adding the tallest slide at sea called the Ultimate Abyss.  Then they’ll also add the Perfect Storm and its trio of dueling waterslides. The kids’ water park will also be enlarged with more splash areas.

There will be Splashaway Bay kids’ aquapark, with twin drench buckets, three waterslides, fountains, pools, water cannons and a Splash Pad for toddlers.

The Lime & Coconut bar will be included in the reimagined pool deck.  Cabana-type daybeds, hammocks and swing seats will be added. New whirlpools on the top deck plus a refurbished, adults-only solarium.

Adventure Ocean, Royal Caribbean’s youth programming is being amped up, too.  There will be more interactive activities and immersive experiences. Teens will also get a new area to hang out with gaming consoles, music, movies and a new outdoor deck.

Clash in the Crystal City is the new glow in the dark laser tag.   The Royal Escape Room – Apollo 18: Lunar Landing will challenge guests ability for puzzle solving before time runs out.

Read next:  How much will a Perfect Day at CocoCay actually cost?

Allure of the Seas refurbishment will see changes to existing dining venues as well as some new, already popular eateries.

Spotlight Karaoke is a dedicated karaoke bar with a main stage and a private room.  Playlist will have thousands of songs to choose, plus music trivia and theme nights.

When the Allure refurbishment is completed, the ship will sail from Barcelona, Spain on May 10, 2020 for seven-night western Med cruises.  In November 2020, Allure of the Seas returns to Miami for seven-night eastern and western itineraries. 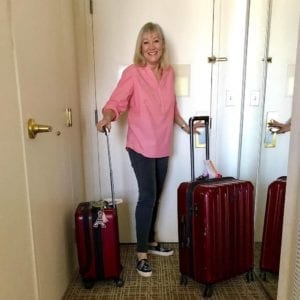 What You Should Pack for a Cruise – Plus Checklist