These first two of six Prima Class ships will, as Norwegian put it, “push the boundaries of traditional cruise cuisine with the debut of nine new dining and beverage venues including Metropolitan Bar.”

This restaurant will showcase high-end Mediterranean cuisine made with simple yet sophisticated ingredients.

Nama is the new sushi restaurant with premier sushi dishes prepared by master chefs who will create the sushi and sashimi masterpieces.

The venue is set among a whimsical Japanese backdrop inspired by the restaurant’s menu items.

Diners will see a marble sushi bar that replicates the marbling in the high-quality sashimi and soft orange ambient lighting that represents the color of masago (fish roe).

As on many of Norwegian’s ships, the main dining room on Norwegian Prima is located aft to provide diners with a 270-degree views of the ocean.

The ship’s two main dining rooms, with traditional dining at Hudson’s and more upscale cuisine at The Commodore Room, will boast a revamped extensive fixed menu.

Options will include more global dishes that includes Spanish Paella and Italian mussels prepared in a white wine sauce.

These two dining rooms will offer vegetarian options as well with items like mushroom risotto and cauliflower piccata.  The new menu will also boast a build-your-own-pasta section.

Guests can select their choice of pasta, sauce, and topping, providing more than 24 meal combinations.

The menu will also include a “Specialties” section where diners can select a dish from one of the ship’s specialty dining eateries.

The revamped menu will debut first on Norwegian Prima and will roll out across NCL’s 17-ship fleet through 2023.

Up on Deck 17, the Surfside Café and Surfside Grill feature a diverse menu, with self-serve casual dining, and items prepared “a la minute” upon request.

The Metropolitan Bar will be introduced under Norwegian’s new Sail and Sustain program.

This innovative bar features zero-waste cocktails prepared with surplus ingredients (like banana peels!) as well as a fully sustainable spirits and biodynamic wines.

Biodynamic wine?  Metropolitan Bar will showcase more than 20 biodynamic wines.  These are wines that are produced with organic farming methods such as using compost as fertilizer and avoiding many pesticides.

The Metropolitan Bar’s signature sustainably made cocktail the “Primadonna”, takes a play on an Old Fashion and is crafted using surplus banana peels with Flor De Cana rum that is produced with 100% renewable energy.

Other new bar and lounge options on Norwegian Prima and Viva include The Belvedere Bar, a contemporary cocktail lounge featuring crafted cocktails with a modern, fresh take on classic drinks.

Norwegian’s first three-story, glass-walled Penrose Atrium that spans Decks six, seven and eight was designed by Miami-based Studio Dado.  The objective was to evoke the sense of wonder felt by the ocean’s earliest explorers.

The grand three-story space will be showcased with a large-scale chandelier custom built by the renowned Czech lighting design firm Lasvit.

The chandelier installation was inspired by constellations and features moving light fixtures weighing more than 7,300 pounds.

Surrounding Penrose Atrium will be a three-deck-high light feature that mimics the feeling of the sun rising on the horizon.  There will also be a three-level wall art piece that resembles a topographic map.

Norwegian Prima and Viva will keep many of their signature eateries.  This includes Cagney’s Steakhouse, with a refreshed design and new décor that celebrates the 20th-century modernist architecture of Chicago.

Le Bistro French specialty restaurant will be outfitted with three floor-to-ceiling chandeliers, coffered ceilings and plaster moldings.  Even the lighting is brighter.

Within Indulge Food Hall, there will be 11 different eateries.  Some of these include Onda by Scarpetta, Los Lobos, The Local Bar & Grill, Vibe Beach Club, Waves Pool Bar, and the Prima Speedway Bar.

Way up on Deck 17 is the popular Observation Lounge, a multi-use venue featuring different areas for lounging, and socializing.

On these new ships, the ambiance in the Observation Lounge will be more cozy, with alcoves separated by elegant screens and partitions.

The refreshed Observation Lounge will also offer complimentary use of telescopes.

The Humidor Cigar Lounge returns as the premiere cigar shop and cigar lounge.

More Norwegian Prima Dining and Beverage Options To Be Announced

In total, both new ships will feature a whopping 35 dining and lounge options.  As we find out more info, we’ll let you know.

Norwegian Prima is scheduled to debut in November 2022 in Southampton, England.  Norwegian Viva will launch in 2023. 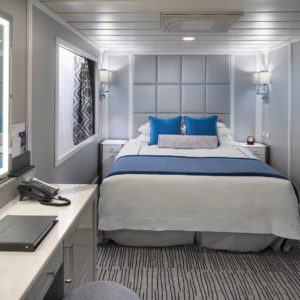