In case you missed the memo, Cunard will build a new ship, its fourth ship in the fleet, and will launch sometime in 2022.  By then it will have been 12 years since Cunard introduced their third ship, Queen Elizabeth, back in 2010.

Today, Cunard announced that world-renowned designer, Adam D. Tihany will be the Creative Director for the new Cunard ship.  No small endeavor, Tihany’s job will be to oversee the entire interior design process of the as yet unnamed ship.

Adam Tihany is renown for his designing of luxury hotels, resorts and even restaurants around the world.  Three remarkable properties that he’s designed include The Beverly Hills Hotel, Belmond Hotel Cipriani and The Oberoi New Delhi.

“The name Cunard is obviously magical and I’m very excited to be involved in this project,” Tihany said. “If you look at the history of Cunard, it has always been a forward-looking brand. It has a classic image but actually each ship has been innovative for its period. We want to continue this tradition and move the brand forward with the creation of this exciting and spectacularly beautiful new ship.”

What to expect with the new ship

Tihany continued that he will design the interiors with a light, contemporary look, but making certain that it maintains the Cunard feel.  He went on to say,  “The new ship will celebrate Cunard’s British heritage but with a whisper, not a shout. Everything a guest expects to see on a Cunard ship will be there, but in a different way to the other three.”

Read Next:  What to expect on a Queen Mary 2 transatlantic cruise?

Having designed restaurant interiors for celebrity chefs like Heston Blumenthal and Thomas Keller, Tihany and his team of designers are currently working on plans for the new ship’s dining areas.

Construction of the new Cunard ship will take place in Italy at Fincantieri shipyards.  This will be the 249th vessel to sail under the Cunard flag.  Along with Queen Mary 2, Queen Victoria and Queen Elizabeth, Cunard will have four ships in service for the first time since 1988. 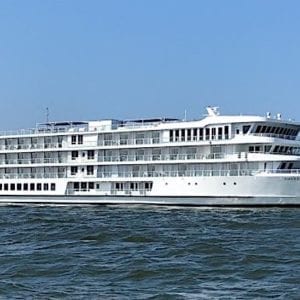