It was “Go for Launch” today at Port Canaveral.  Carnival Cruise Line and Port Canaveral broke ground for the construction of the new Cruise Terminal 3 complex.  As you might expect, nearly everything here on Florida’s Space Coast has a space-theme.

The new terminal, called the Launch Pad will homeport Carnival’s new cruise ship, the 6,500 passenger Mardi Gras in the fall of 2020.

Even a NASA “Spaceman” was on hand to symbolically plant a Carnival Cruise Line flag on a simulated lunar landscape.  No, that’s not the lunar lander in the background.

With the wind furiously blowing off the water, invited dignitaries grabbed shovels and “broke” ground.  Sand, actually, as all of us onlookers struggled to keep the grit and dust out of our eyes.  You really didn’t want to miss a shovelful.  It was a very exciting moment, especially for those of us who live on the Space Coast.

Said Carnival President Christine Duffy, “We began our operations from Port Canaveral nearly 30 years go – coincidentally with our original ship of the same name. We’ve had a great relationship with Port Canaveral during that time and we’re proud, honored and excited that our newest and most innovative ship, Mardi Gras, will sail from the new Terminal 3.  We are pleased to be the port’s number one cruise line and Mardi Gras promises to be a spectacular addition to the Space Coast.”

About the new cruise terminal

The cost of the new terminal project is estimated to be around $163 million.  This will be the largest project in the Port’s 65-year history.  The futuristic design includes a gantry-style entry, to tie in with the Port’s connection to nearby Cape Canaveral.

Bearing two names, CT-3 (short for Cruise Terminal 3) and the Launch Pad, the massive two-story building will have an adjacent six-story parking structure.  A state-of-the-art check-in and security area will be on the second floor with seating for 1,700 guests.  The parking structure will accommodate 1,800 cars.

Currently under construction in Meyer Turku, Finland, Mardi Gras will arrive at Port Canaveral mid-October 2020.  The ship will feature BOLT, the first roller coaster at sea.  With 20 passenger decks, the ship will also have six distinctive themed zones.

Finally, after a special eight-day cruise to the Caribbean on Oct. 16, 2020, Mardi Gras heads home to Port Canaveral.  On October 24, 2020, the ship will begin year-round seven-day cruises alternating Eastern and Western Caribbean itineraries. 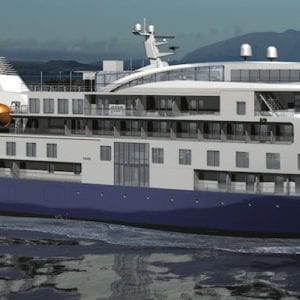