Without fanfare, just before dawn, Captain Emmanouil Kasselas docked the Freedom of the Seas at Terminal 10, her new home at Port Canaveral.  A few Cape Canaveral residents were out on their oceanfront balconies to witness a first for Port Canaveral.  This would be largest cruise ship ever to enter the channel at Port Canaveral.  People who live and work on the Space Coast had waited years for this moment.

By mid-morning, city officials, media and cruise passengers began to slowly stream into the port.  Aboard the ship in the Viking Crown Lounge, festivities began at 11am with champagne and hors d’ouvres for the forty-plus invited guests.  Taking the stage, Captain Kasselas offered a brief speech. Then the Plaque and Key exchange began. Rocky Randels, the Mayor of Cape Canaveral, presented the Captain with the first plaque. Representatives from Port Canaveral, the city of Cape Canaveral, Cocoa Beach and surrounding communities exchanged commemorative plaques with several of the ship’s officers.

Passengers began to board by late morning and were greeted with glasses of champagne.  Immediately they made their way through the foyer, champagne in one hand and their carry-on bag in the other.  Guests wasted no time to begin to explore the ship’s unique features.

Across the parking lot at Jetty Park, people started to arrive in the early afternoon, some in cars, others in their campers and RVs.  Port Canaveral and Royal Caribbean planned a “Sail-A-Bration” event in honor of the arrival of the Freedom of the Seas.  Admission was free and people were encouraged to bring a non-perishable food item for donation to the Brevard Sharing Center. Television and radio stations broadcast the event “live” and representatives from local and Orlando print media mingled among the crowd and interviewed the spectators.  Everyone was given commemorative flags and banners to wave when the Freedom passed by along-side the jetty as she left port.

Originally, the Freedom of the Seas was to drop lines and leave port after her “little sister” the Monarch of the Seas set sail.  At the last minute, plans changed and the Freedom proudly led the procession through the channel.  Flanked by tugboats spraying water into the air, the Freedom of the Seas and her 3,900 passengers were wished bon voyage with cheers, waves and applause from more than 4,000 envious on-lookers.  People were in awe of the sheer size and grace of the Freedom as she emerged from behind the huge rocks that lined the curvature of the jetty.  As soon as the ship reached the end of the shallow channel, the tug-boat captains tooted the boats’ whistles.  The Freedom answered back in kind with three long blasts from her horn as she entered the ocean on her first voyage from Port Canaveral to the Caribbean. 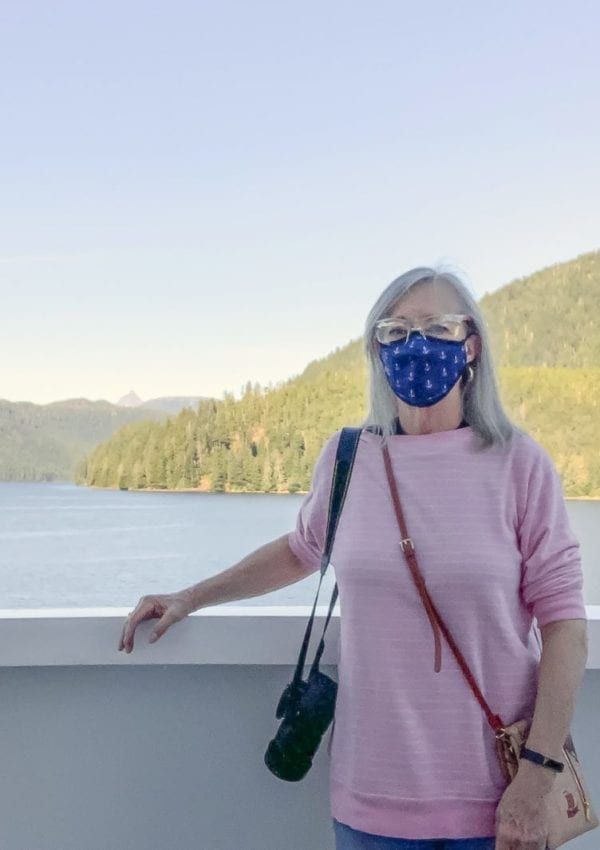