As if positioning their newest ship “Fun Ship,” the Carnival Magic, to homeport year-round in Galveston wasn’t enough, add in a free pier-side concert by Grammy Award-winning band Maroon 5 and you have one spectacular inaugural event.

The Carnival Magic is scheduled to arrive in Galveston on November 13 after completing a 16-night transatlantic crossing from Barcelona.

The Carnival Magic entered service this past May and spent the summer and fall cruising the Mediterranean.

How to get invited
To try to score a couple of the “magic” tickets requires a little due diligence and creativity.  Carnival will distribute the free tickets through various channels with a strong strategy focused on their social media fans.  Carnival’s Facebook fan page will feature a contest that asks fans to record a video of their best dance moves in return for a chance to win two tickets to the concert including round-trip airfare, hotel, ground transportation and spending money.

Texas residents who are fans of Carnival’s Facebook page as well as those who follow the humorous blog written by Carnival’s Cruise Director extraordinaire John Heald, will be offered even more ways to win tickets.   Texas radio stations are jumping into the excitement with their own giveaway contests.

“We wanted to do something big and memorable to mark Carnival Magic’s U.S. debut and what better way to celebrate than to bring together fans of music and fans of Carnival, along with our partners in Galveston, for an exceptional afternoon of fun and entertainment,” said Gerry Cahill, Carnival Cruise Lines’ president and CEO. “We’re thrilled to kick off year-round Caribbean cruising on the newest and most spectacular ship sailing from Texas.”

Immediately following the concert, Carnival has invited thousands of travel agents to come onboard for a dining and entertainment experience.  Like the other Carnival inaugural previews for travel agents, not only will the dinner selection be exemplary but they will pull out all of the stops to dazzle and thrill the audience with their most fabulous theatre performances.

This will definitely be a “first” for Maroon 5, who have entertained all over the world.  Adam Levine, Maroon 5 frontman and coach on the hit NBC series “The Voice,” said, “We’ve played every kind of venue imaginable across the world, but we’ve never helped to launch a new cruise ship. We’re excited to work with Carnival and to be part of the Carnival Magic celebration for fans in Texas.”

Carnival Magic in the Caribbean
Not to miss a beat, the very next day the Carnival Magic will set sail to begin its fall Caribbean cruise season.   The ship will feature two seven-night alternating eastern and western Caribbean itineraries which will include port visits to Montego Bay, Grand Cayman and Cozumel on the western cruises and Nassau, Freeport and Key West on the eastern voyages.

As with all new ships, the Carnival Magic has introduced more than a half-dozen new venues and innovations.  The RedFrog Pub, a colorful Caribbean-inspired watering hole featuring its own private label draught beer; an authentic family-style Italian restaurant, Cucina del Capitano; an outdoor recreation complex called SportSquare which has the first ropes course and outdoor fitness area at sea.  Similar to sister ship, the Carnival Dream, the Carnival Magic also has the expansive WaterWorks aqua park which features a 312-foot-long spiral water slide  and for ultimate relaxation sans kids there’s the adult’s only Serenity Retreat. 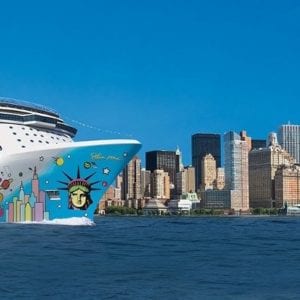