For us east-coasters, it’s great news to learn that the Carnival Ecstasy will head for Charleston in February 2016.  I love all of the Florida ports, but it will be fun to experience a sailaway from a new port.

Carnival Ecstasy will offer four- to seven-night cruises from Charleston.

As of February 6, 2016, Carnival Ecstasy new itineraries will offer a variety of options.  The four-night cruises head to Nassau while the five-night cruises call on Nassau and Freeport.  If not Freeport then it will be beautiful Half Moon Cay, a private island in the Bahamas.

Looking for more time your cruise vacation, there’ll be three six-day cruises that call on Freeport, Nassau and Half Moon Cay.  Dates are May 23, Oct.2 and Oct. 30.

If you want an even longer cruise, there will be a choice of two seven-night cruises that visit Grand Turk, Half Moon Cay and Nassau or Amber Cove (Carnival’s newest port in the Dominican Republic), Grand Turk and Half Moon Cay.

“Our popular southern Caribbean cruises from San Juan offer our guests the opportunity to visit five different tropical destinations during their week-long vacation and each of these fantastic ports feature not only spectacular beaches but also a wide variety of sightseeing opportunities and attractions,” said Christine Duffy, Carnival’s president.

Carnival Fantasy moves to Miami for three- and four-night cruises.

Yes, Virginia, there will be repositioning cruises.

Carnival Victory will operate a special seven-night cruise that will depart from Port Canaveral, Fla., Oct. 30, 2016, and arrive in San Juan Nov. 6, 2016.  Ports on this itinerary include St. Thomas, St. Kitts, Antigua and St. Maarten. 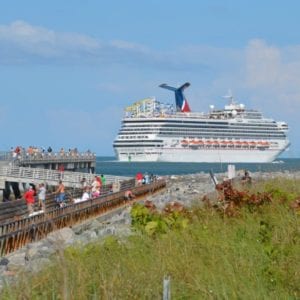