Sorry, Princess Cruises, you’re not the only Love Boat on the water.  One month aboard the AmaWaterways AmaLegro proved my point.  No, not for me!  I’m referring to the amount of lovebirds working aboard this European river ship.

If you’ve taken only one ocean cruise, you are bound to have heard some crew member, usually dining room staff, answer probing questions from the passengers at their tables.  What you learn is that they are working far from home, with their spouse or companion living thousands of miles away.  If they are able to see their loved ones for two or three months out of the year, they are lucky.

Aboard the AmaLegro, I was told that among a staff of less than 60, there were eight couples, most either married or engaged.  That’s nearly one-quarter of the crew! Most had met right there on the AmaLegro.  And since they were all from somewhere in Europe, their extended families were always within a two hour flight.

I had the privilege and good fortune to get to know two very special “lovebirds” aboard the AmaLegro; Tedi (short for Teodora) and Artur Carvalheiro.  Tedi is the Housekeeping Manager and Artur, the Hotel Manager.

Seated in the quiet aft lounge, they shared their story with me about life and love while working on the water. 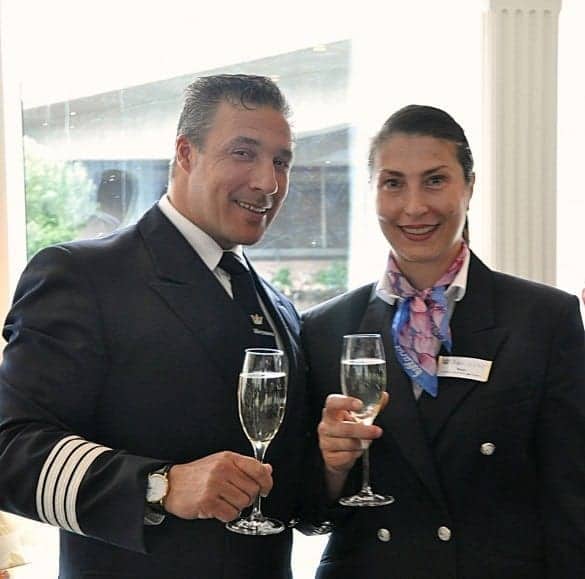 Me:  Tedi and Artur, your story is so fascinating…please tell me about how you met each other.

Artur: We met each other on an ocean liner about eight years ago..

Artur:  We started out as just colleagues.  Then when we opened a vessel for the ocean cruise company, that’s when we started our relationship.

Tedi:  How the relationship started is really interesting.  First we were only working together on the ocean.  Then, we both opened a big ship and that is how and when we fell in love.  Artur was helping me very much and very supportive, asking if I needed help lifting or moving things.  He was very nice and charming as he is in general.  So, in two months’ time everything just happened. We fell in love.  For good, this time! (Artur agrees and laughs).

Artur:  When we first met each other, I was managing a 24-hour buffet, a specialty restaurant, main dining room and a team of eighty-six people. The buffet never closed except during the boat drill and embarkation.  Then I was working to be sure that a thorough cleaning was completed. It wasn’t until we opened the new ship that we were able to find time together with our schedules.

Tedi: We never planned to quit the big ships but what happened was the scheduling. Our contracts would conflict.  He was supposed to be on one ship and I was going to another. Then we’d meet for a month or two and then again he’d go to one ship and I’d go somewhere else.  It was four months working and two months of vacation.

Artur:  Now we are at that age where we don’t want to be separated anymore.

Me:  How did you find your way to the river ships in Europe?

Tedi:  We decided that we wanted to find a place that was going to be close to our families but still the same job because we love it and we could be together.

Artur:  Here on the river it is much easier.  AmaWaterways really supports couples. I believe it is really important for a relationship to succeed.  Both people are happier because you have your other half with you.

Tedi:  First, it reflects on your work. Second, you’re more calm and third, you don’t have to think about what your other half is doing at home.  You don’t have to rush ashore to find a phone card and a phone.  We might not have very much time together during the day but you know they are somewhere on the ship. This gives you a confidence that all is okay and you really work better.  I can say so for myself.

Me:   Tedi, as head of Housekeeping aboard the AmaLegro, what is your responsibility?

Tedi:  I take care of the laundry, manage my “girls” (as Tedi motherly refers to the housekeeping staff) and the public areas.   There are six housekeepers, one masseuse / hairdresser, one laundry master and myself.

Me:  When does your day begin and end?

Tedi:  I usually start at 6:30am to make sure the public areas are well taken care of  before the guests’ breakfast.  There’s a meeting with my girls at 7:00am when I tell them about any anniversaries or birthdays. Then at 7:30am we start our job in the corridor, as you hear us every morning! 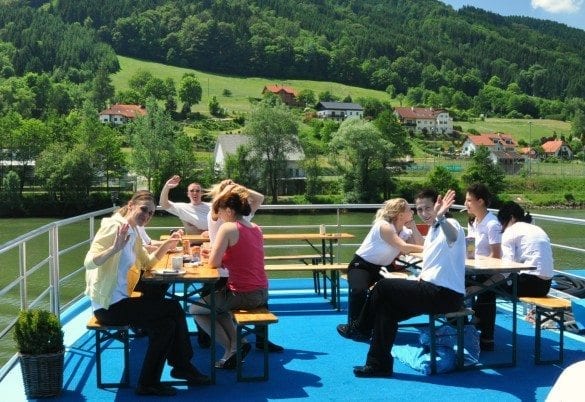 Me:  Artur, you said you managed eighty-six people and three dining venues.  How does that compare with your responsibilities aboard the AmaLegro?

Artur:   River ships are different because there is only one dining room.  We serve early risers and a light lunch in the lounge but it’s usually a small turnout – maybe twenty guests.  Everyone goes downstairs for lunch in the restaurant.

Here, I manage a hotel crew of thirty-four people.  There is also the nautical crew but that is the Captain’s responsibility.  I’m very happy with the team we have.

Me:   Everyone seems happy with your team.  It’s been a wonderful three weeks for me.

Artur: I’m a very positive person and I love to spread the positive energy.

Me:  Tedi or Artur, what do you think is the biggest challenge working together on a river ship?

Artur:  Our main challenge is to make sure all of the guests and crew are happy. Very important when someone goes on vacation is that they are happy with the food.  It’s all about the food.  If you’re not happy with your dining room experience, it will lead to a very upset person.  I want to make sure everyone is happy.

Me:  Artur, what’s in your shirt pocket?

Artur:  Not quite, only since 1997 when I became assistant maître d’. I would hold up the card and say to the crew, “No smile, no off.” (meaning no leave time ashore).  Then I made a card for the passengers, “No smile, no food!” 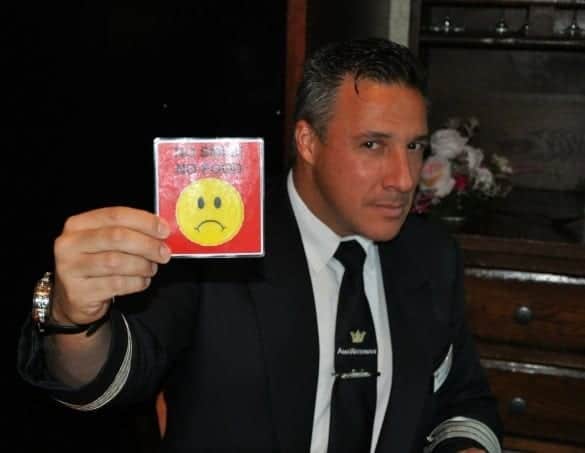 Me:  Tedi, you are from Bulgaria and Artur is from Portugal.  When it is time for your vacation, where do you go?

Tedi:  We spend one month with my parents in Sophia, the capital city. Then we try to spend one month in Portugal with Artur’s family.  If there is time, we try to find a week, maybe two, to spend by ourselves or with our friends.

Our vacation is always in the winter because of the weather and the rivers can freeze.  At this time, the ships are given a rest and prepare for the next season’s cruises.

Artur:  I’d like to spend more time in Portugal.  I was a beach boy, growing up five minutes’ drive to the ocean. I love to go ocean fishing.

Tedi:  I don’t like to fish (she laughs.) Artur likes to fish even in the winter but in Bulgaria the water is frozen and he has to go ice fishing.  Every time he does that, my heart gets nervous.

Artur:  We drill holes in the ice.  One time I could hear the sound of the ice cracking and it was getting closer and closer.  It stopped right near us.

Me:  Where else in the world would you like to work on a river boat?

Artur: We love it here in Europe, on the rivers.  It’s close to our homes, our families and friends.

Me:  Okay then, hypothetically speaking, if you could pick any river to work on just to try it for the heck of it, where would you like to go?

Tedi:  Brazil, on the Amazon. I was there once before.

Artur: Asia.  Or the Douro river in Spain.

Me:  Tedi, would you go all the way to Asia to work with your husband?

Tedi:  Of course (she says with a very big grin), I follow the man.

Me:  Both of you seem so very happy together.  How many years have you been married?

Me:  Thank you so much for taking the time, your free time, to sit with me for this interview.  It has been both a privilege and pleasure to get to know each of you over the span of three weeks of cruises. 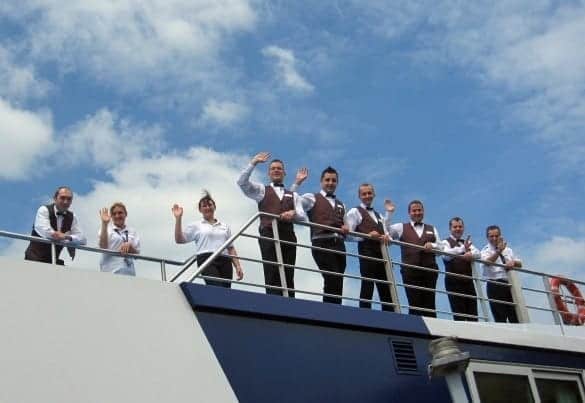 Note:  Due to unforeseen circumstances, I stayed onboard the AmaLegro for four weeks.  Three times I experienced “turn-around day,” trying to stay out of the way while 120 – 140 passengers completed their debarkation.  Next, I would watch as the crew went into overdrive to prepare the ship for the next week’s cruise.  By 3:00pm, the ship and staff were poised and ready to greet their new guests.

The Best Time of Year to Take a River Cruise

Looks pretty cozy doesn’t it. On your next (or

If you love lighthouses, this is Eldred Lighthouse

Another reason why I don’t fly. @Amtrak cross-co